June 19 - 25, 2011 - I had joked about wanting to drive around Lake Michigan because "it seemed like a fun thing to do." One day Tanya had decided she wanted to travel somewhere and started making reservations based on my idea. It would just be the two of us this trip and we would be camping. Tanya's dad would be watching our dog Merlot for us which made us and Merlot happy. He is her favorite person after all.


Our trip would have us camping for two nights in each of three Michigan State Parks, J W Wells State Park in Cedar River, Straits State Park in St. Ignace and Holland State Park in Holland. We were going to stay one night in Sheboygen, WI but they required a two night stay. Also, since we have been to Door County, WI the past three years we figured we could skip this part. about halfway through Wisconsin it started raining. We didn't know it at the time but this would be a recurring theme for the trip.


Nights 1 & 2 - J W Wells State Park, Cedar River, MI (Upper Peninsula)
The rain had subsided a bit when we arrived at the park. It allowed us to set up the tent with minimal water getting in before the rain fly was put on. Our campsite was on the shore of Green Bay (body of water, not the town).


Not a lot to do in the area except enjoy the scenery. We had dinner at the Lighthouse Pub a mile from the park entrance. We had a great pub burger and some pan fried whitefish. Both were very good. Then back to camp for a fire and then sleep. 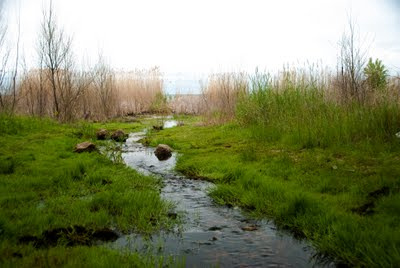 A stream running past our campsite. Green Bay in the background.
The next day we explored the U.P. We started with breakfast at The Swedish Pantry in Escanaba. Had some delicious swedish pancakes served with lingonberries, warm syrup, and melted butter.
After breakfast we toured the Sand Point Lighthouse in Escanaba and then headed to the Iron Mountain Mine in Vulcan, MI. Heading into the Iron Mountain Mine.


After the mine tour we stopped at the Pasty Oven for lunch which we I enjoyed at a roadside rest area next to Fumee Falls in Quinnesec, MI. 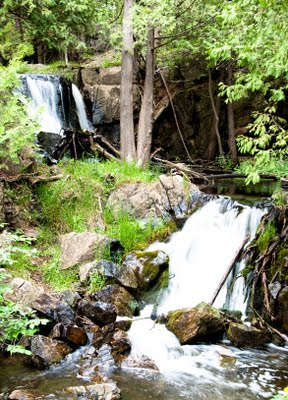 Fumee Falls in Quinnessec, MI
The next morning we woke well rested and packed up the tent. As we finished loading the car the rain started again. This day would be a travel day to St. Ignace. We would make a stop at Mackinaw Trail Winery in Manistique. After a few tastes we were back on our way.
Nights 3 & 4 - Straits State Park, St. Ignace, MI (Upper Peninsula) 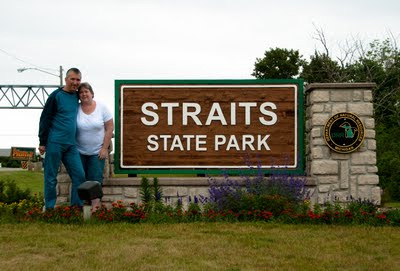 When we arrived at our campsite it was looking like rain. We wasted no time setting up the tent. Within minutes of finishing here came the rain. A deluge! Lucky for us we have an eight person two person tent. We pulled the chairs and cooler inside and enjoyed lunch with a view of the Mackinac Bridge (sort of). 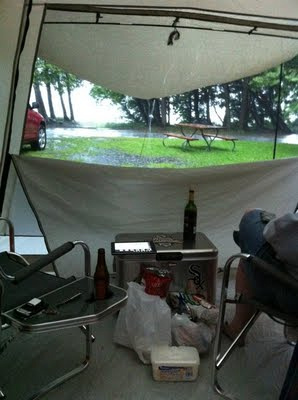 Waiting out the storm. 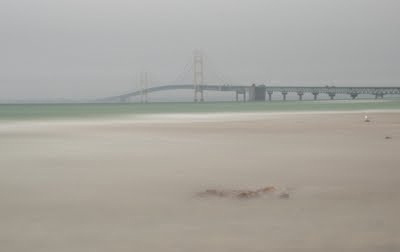 The Mackinac Straits Bridge
The next day we took the ferry to Mackinac Island. Yes, it was still raining and cold. We worked our way up to the Grand Hotel for their Afternoon Tea. It was a wonderful. The one benefit of the weather was the smaller crowds on the island. This was probably why we were able to get two seats with a great view of the foggy bay. The next morning it was off to our third stop of the trip. 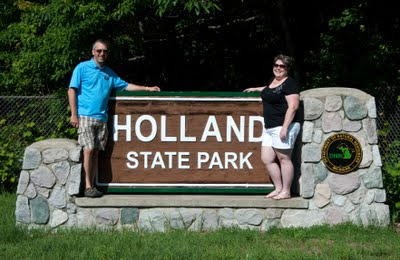 Holland State Park was our least favorite of the three parks we camped. The sites were smaller and it was definitely more crowded. We were, after all, closer to civilization.
We spent Thursday evening roaming downtown Holland. They had a few blocks of downtown closed to traffic and had street performers everywhere. It was really enjoyable. After strolling around and checking them all out we stopped in to the New Holland Brewing Company for some dinner (and beer!!!).
The next day we explored Windmill Island Gardens and then Nelis Dutch Village. 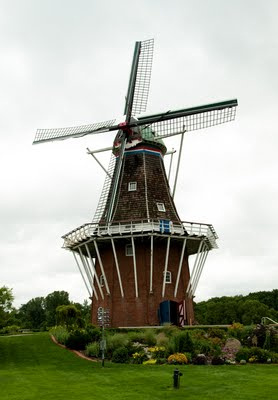 Holland Harbor Entrance
After packing up for the last time we were headed toward home. We did have a few more stops to make. We had lunch reservations at Tabor Hill Winery in Buchanan, MI. On our way there we did stop at Karma Vista Winery in Coloma and after Tabor Hill we visited the Round Barn Winery and Brewery. We did have one more stop before home when we visited our neighbors at their summer home on Crooked Lake.
It was only fitting that as we neared our house it started raining again. A great trip but also, as always, great to be home.
More pictures can be found here: Lake Michigan Circle Tour photos
Keywords: Michigan, Travel
« Previous Post Next Post »