December 30, 2009 - It was pouring out so we took a taxi to Kilmainham Gaol for a tour and then to Dublin Castle.

Around the corner from Dublin Castle was a highly recommended chip shop, Leo Burdocks Traditional Fish and Chips. The fish was very good. The order was large enough to share. It was a take away place so we caught a cab and enjoyed it back in our hotel room.

Tanya took a brief nap while Don and I went down for a couple pints of elixir. Once Tanya woke up we decided to head to the Temple Bar area for some traditional Irish music.

Last night we went to the Temple Bar district for some drinks and traditional Irish music. The cab driver gave us so$e good tips on where to go and where to not go. Our first stop was the Temple Bar. This place was packed, and with good reason. They had a 3 piece group that was very good. Guitar, fiddle and accordian. Mostly instrumental.

A great atmosphere and a great pint and like any good Irish Pub a great selection of Whiskey.

Our next stop was The Quays (pronounced Keys). 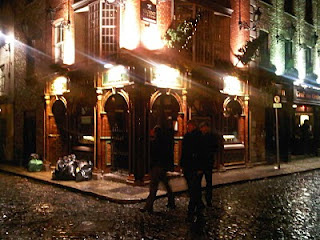 Here they had a 2 piece group that played a mix of traditional irish along with some comtemporary selections. We were able to get a seat at the bar here. Met a nice guy from Scotland who insisted on buying us a drink. After that drink we decided to call it a night and headed back to the hotel. We had planned to go to the Palace Bar (another cabbie recommendation) but sleep was calling us.